Recapping, I did not sleep well the night before the AF 1/2, the day was very humid and windy, and I was sporting my Mizuno Hitogami racing flats which I had never run anything longer than 2 consecutive miles. Ready to race 13.1 miles! Two miles in, I was shocked at how slow I felt in relation to what I was actually running. My average pace was about 5:40 min/mile for the first three miles, and then I slowed to a 6:10 min/mile pace for the next four miles. At the very beginning, I felt incredibly slow despite the fast pace, but I didn’t want to risk slowing my pace anything less than 6:10 out of fear that I wouldn’t PR.

Another psychological element was at play. By starting at the front I felt it necessary to maintain the quick pace in order to not be passed, because getting passed sucks! I think we could say that a number of Murphy’s Law components came together.

And then I bonked….

After the half way point, I was reduced to 7:30-8:00 min/mile pace and then I came to a full stop at mile 11. This was the point when 1 hour, 24 minutes had passed and I knew that any chance of getting a PR was gone. But I also felt horrible, and the minimalist Hitogami’s had destroyed my feet.

I finished at 1:31:58 which was well off, and then spent a confusing 20 minutes in the medical tent after nearly passing out.

The humid and windy conditions affected far more runners than just me that day, but overall the AF ½ was a race that I suffered through. I felt deflated, especially since I felt that my balanced and intense training was defeated by some poor decisions and unforeseeable factors.

Feeling defeated, I immediately started searching for inspiration, mainly to understand why I enjoy running in the first place. A week after the AF 1/2, I went running with a colleague who’s a gifted runner and we set out on a 9 mile trail run. Part way through, my colleague started talking about his plan to return to ultra running out of his own personal need to rediscover why he enjoyed running, and I was a little floored.  Running over 30 miles is fun!? I’ve always considered anything beyond marathon distance as utterly nuts. But I learned that it wasn’t about the distance, but rather the adventure of tackling extremely long distances on rugged trail conditions which attracts ultra runners.

A week later, I ran a 12 mile trail run in Santa Fe, the Big Tesuque 12, a sort of a mini-sky run in its 31st year of organization, which goes from 10,000’ up to a 12,000’ peak and then back. And I felt awesome, not to mention I placed third! Thankfully, this race overshadowed any lingering feelings of defeat.

From that point, my fascination for the trail running and ultra communities took off. After lots of reading and YouTube binging, I’ve come to a really important and obvious conclusion, running is meant to be fun! And I believe those athletes who compete the best, whether they’re elite or middle of the pack, are the ones who genuinely enjoy the pure thrill of running. This joy carries them through the tough moments of pain and enables them to bounce back.

And my interest has become more and more peaked as I have started to envision my own break into ultra running. Envisioning going ultra!

I think the challenge of longer distances in the desert, mountains, and woods presents an opportunity to reset some of my running preconceptions, and hopefully harness my talents to have fun and find success. Even more, I have really come to appreciate how tight-knit and caring the running and specifically ultra communities are. Ultra runners cheer and support each other. If a runner manages to get into a competitive, prestigious race like Western States, a 100 mile foot journey from California’s Squaw Valley ski resort, through the Sierra Nevada Mountains to the town of Auburn, that runner can generally get support from pacers and a crew who will help take care of them and push them to finish. Although pacing and crewing are sacrificial functions, pacers and crew members will invariably take on their own 100 mile challenges. All volunteers, whether they work aid stations or maintain trails, are sacred in the running community, and that is awesome.

Living at 4000’ in eastern New Mexico, I want to take advantage of my location. Silverton, Colorado, which is the site of another famous ultra called the Hardrock 100 (not to mention, this is the race I’m most fascinated by), is within a day drive from our home. In only a few hours I can get to high altitude mountains. Considering where I’ve come from with my running, and the discovery of a whole new kind of running, it seems logical about where the next steps are.

Dwight Rabe grew up in Hawaii and Washington State. He’s a runner who loves being outdoors, and is often looking for a new challenge. He loves his wife. He makes a pretty mean cocktail and can cook up a storm.

This post contains affiliate links. Affiliate links means we may earn advertising or referral fees if you make a purchase through this link, without any cost to you. All opinions are honest and all recommendations are based on our experiences.
Tagged: Big Tesuque 12 california Colorado distance Hardrock marathon New Mexico ohio racing Santa Fe Silverton trail running ultramarathon western states

Learning how to crew for an ultra 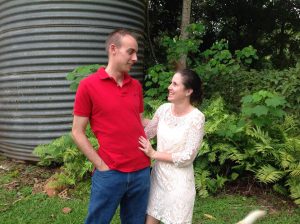 We are Anna & Dwight Rabe.

We live. We Love. We Travel. We Serve. This is Not a Pedestrian Life.